I graduated from ANU medical school in 2010, and with some sadness left the ACT seeking adventure and opportunities to learn in a different environment. 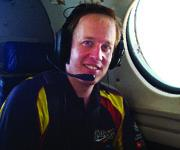 I went to Darwin, so at least the hospital building looked the same! Darwin was a great place for internship. There were only 25 interns at the hospital and we formed a close knit band held together by an active RMO society of which I was the social officer. Running the hospital ball (held outside next to the beach under a setting tropical sun), our fortnightly bar tabs and other activities implicated me in the death of many hepatocytes. However the junior staff knew each other so well outside of work that team dynamics and patient care was improved inside work.

The lack of specialisation in Darwin gave the interns good exposure to a broad range of medical problems. General medicine and general surgery really were just that. The NT’s unique demographics though did give me plenty of exposure to wounds, infections and alcohol as well as diseases such as meliodosis and rheumatic fever to which I’d had little exposure in the ACT.

The NT’s laissez-faire attitude to paperwork allowed an interested junior doctor to travel to remote communities on outreach trips and careflights which were great memories too.

Outside work (which did happen from time to time) was very different from Canberra, both in weather and population. I was recruited at the bedside by a hospital patient to become the doctor for the Tiwi Bombers football club, an Indigenous AFL team based in the remote Tiwi Islands. I would go to their games and attend to their injuries – and not only once the match had started.

Once a player turned up to the game bleeding from the head as his girlfriend had thrown a rock at him! I would also call ahead to my friends in ED if a player was en-route for an X-ray so they would get it done quickly before their plane went home! The NT AFL was so keen for doctors, they flew me to the Gold Coast to be the doctor for their under 16 and under 18 teams in a tournament which was a great little weekend as well.

After Darwin I got married (to a fellow ANU medical school graduate) and we decided to try new things and went to Cairns for our second year. We had a one-week wedding and honeymoon in-between contracts and soon found ourselves in Mareeba, a small community an hour from Cairns. That posting, and a similar later posting in Innisfail (1 hour south) gave us regular activities for independent practice free from such meddlesome things as supervision. We learned quick!

Cairns broadened our medical knowledge; for example by introducing us to octogenarian and over patients that were very rare in Darwin. At work people are mostly friendly and supportive with plenty of mixing between different disciplines. The hospital oztag team (which I captain) has doctors, nurses, allied health and support staff and whilst we don’t win much on the field we work together better at the hospital as friends as well as colleagues.

Next year our travels continue as we move to Newcastle to begin GP training. I hope that our past two years have given us a good platform to begin a career as generalists. Being able to spend our first two years in such interesting and beautiful parts of Australia is a nice bonus as well. The medical world is a big place and I look forward to whatever interesting and hopefully useful roles I will find myself doing in the future.