Dr Chris Moy - Vaccines are our ammunition against COVID 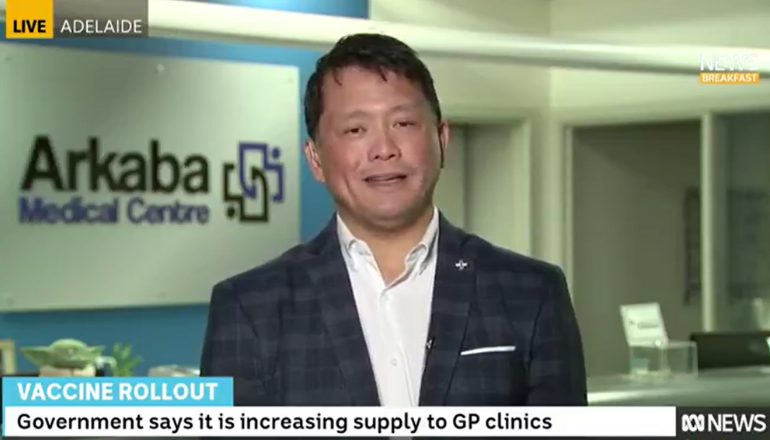 MICHAEL ROWLAND:        Now, let's get more on the vaccine rollout. The Federal Government has confirmed it is significantly increasing the supply to GP clinics to ensure more vaccine doses are available as everyone over 50 becomes eligible.

MADELEINE MORRIS:        So, Chris Moy, Vice President of the Australian Medical Association joins us from Adelaide. Chris, thanks for joining us. So, there are 4000 GP practices in the country which are giving out the vaccine. So, this will mean now 3000 practices currently giving 50 doses week will, from next week, be able to give out 150; and a further 1000 practices will get twice as many doses. This going from 50 to 150 - it's good news, is it going to make much of a difference?

And just to give you an idea, general practice, I think, or primary care have given out 1.2 million COVID vaccines, which is actually the majority of the shots so far. But in the very short time that the flu shots have been out, I think we have already given out something in the order of about three or four million flu shots. So, if we'd had the ammo, we might have been able to do even better than we are now. But look, it's a really important step. We just need to get that mismatch between demand and supply as, as close as possible.

MADELEINE MORRIS:        Just questions about how even it is throughout the GPs. So, Rhonda has written in, she says, good morning from Tamworth, I'm awaiting a call from my GP who reports limited supplies. Other GP clinics here have plenty. Is it a lottery which GP clinic gets how much? Or is this well-planned?

CHRIS MOY:                         I think basically there were, based on certain parameters such as what- you know, total population; number of, say, elderly patients - those sorts of things, they were starting point. Now, there needs to be some recalibration of that, so there is this matching of demand to actual supply.

The AMA, Dr Omar Khorshid and myself, we're catching up with Commodore Eric Young today - he's been put in charge of overseeing aspects of the distribution. So, we'll have a chat with him about trying to get that, that disparity between the demand and actual supply as close as possible because that's the best way to try and get it out there as efficiently as possible.

MADELEINE MORRIS:        Yeah. I mean, we're still only administering 80,000 doses on Tuesday in this country.

CHRIS MOY:                         Yeah. That's the issue. As I said, I just gave you the numbers about the flu shots and, you know, you just realise that we have the capacity to do stuff and we do need to scale it up getting towards closer to about 200,000 at some stage. But look, we are actually getting there, we just need the ammunition at the moment.

MADELEINE MORRIS:        Can you just explain to me what's going on with AstraZeneca distribution, if you actually know? So, just looking at the figures, AstraZeneca doses distributed from 330,000 this week to 450,000 due next week, 600,000 due the next week. This is Greg Hunt saying this. I thought we were meant to be at a million doses a week coming out of the AstraZeneca factory. What's going on?

CHRIS MOY:                         Oh look, we had a very slow start because of the situation with lack of supply. I mean, I think we're about three million-plus short of where we were with the supply we were supposed to get from overseas, which really put us behind.

I think now the supply is starting to come in, but there has to be, to some degree, and I'm aware of this, they've had to hold back some doses for the second shots at 12 weeks as well.

So, once that comes into line, it should become a lot better in terms of the supply for first doses. But again, you know look, I think it is ramping up at the moment and we are seeing the numbers get to sort of the numbers that we need to get to. So, let's see whether we can get that mismatch better over the next few weeks or so.

MADELEINE MORRIS:        And just finally, Chris, everyone over 50 will be eligible to get their vaccine from their GP come May 17. What is your advice to people who are in that cohort about getting on the list? Should they call their GP, should they wait for a text or an email? How should they go about it?

CHRIS MOY:                         Probably, if you can, get on the health direct website and check out where you can get it, or talk to your GP if you happen to be in contact with them. But just go get it. All I can say at the moment is I know there's been a level of anxiety about what's been going on with the vaccine rollout, but I think things like what's happening in Sydney and India are the sort of things we need to keep in mind.

I mean we're sitting on a precipice; we've dodged a lot of bullets; but we need to get vaccinated. So, when it's your turn, get your vaccine.

MADELEINE MORRIS:        Okay. Chris Moy from the AMA, thank you very much.