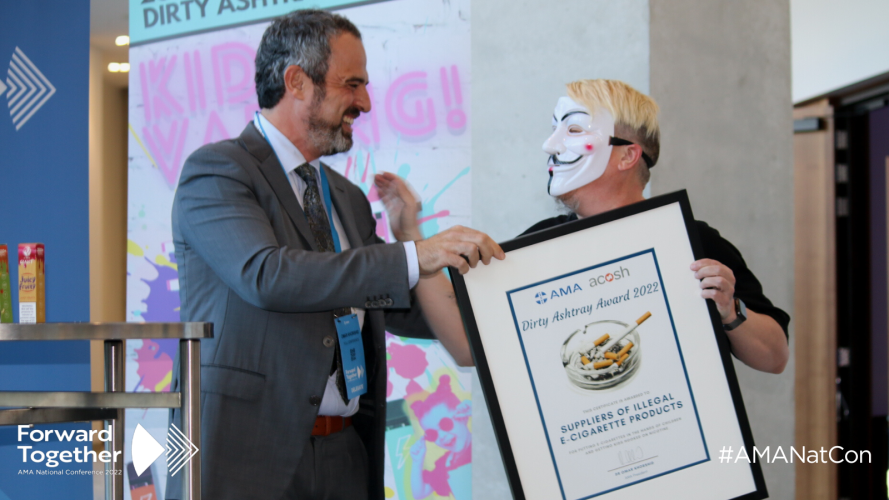 Victoria and Queensland have received a Dirty Ashtray Award for their lack of efforts in preventing vapes being sold to children, with retailers who illegally supply vapes to young people also getting a gong.

Presenting the awards with the Australian Council on Smoking and Health (ACOSH), AMA National President Dr Omar Khorshid called on Queensland and Victoria to require all tobacco retailers to be licenced to protect young people for the enormous harm caused by tobacco products.

“Inadequate priority has been given in these jurisdictions to implementing existing state laws, and ensuring compliance with those laws, to prevent the sale of illegal e-cigarettes to children and teenagers,” Dr Khorshid said.

“Retailers of tobacco products in both states are not required to be licensed and this makes it very difficult to enforce existing laws and ensure compliance.

“We are calling on Queensland and Victoria to commit to a requirement for all tobacco retailers to be licensed to protect young people from the enormous harm caused by tobacco products.”

“Australia’s regulatory system needs to catch up with the rapid increase in children using vapes to prevent further generations taking up the harmful addiction. Since 2016, the rate of children and young people using e-cigarettes has grown rapidly with 21.7 per cent of young adults (aged 18–24) having used an e-cigarette device in 2020–21, but 83.3 per cent have never smoked.”

Dr Khorshid said suppliers of vapes must be accountable for their part in undermining public health and safety.

“It’s illegal in Australia to sell, supply or possess nicotine vaping products without a doctor’s prescription. However, a lack of enforcement means these products are easily accessible and available online and in shops across the country.

“We are extremely concerned about the growing and unacceptable levels of e-cigarette use among young people aged 18–24 years and by secondary and primary school students. Many vaping products appeal directly to children with their bright, colourful packaging and fruity flavours – creating an illusion of being a safer alternative to smoking.

“But these products can contain up to 50 times more nicotine than a cigarette and even the ‘nicotine-free’ e-cigarettes contain toxic, harmful substances — with some of the same substances used in nail polish remover, weed killer, and insecticide.

“Testing has also shown that some of the vapes labelled ‘nicotine free’ do contain nicotine, deceiving people into becoming unwittingly addicted.”

Vaping is linked to serious lung disease and some of the chemicals in vapes are known carcinogens, which can damage human cells and DNA. A recent comprehensive literature review by the National Health and Medical Research Council (NHMRC) highlighted the increased risks of adverse health outcomes from vaping, including poisoning, seizures, burns, and lung injury.

An Australian National University review on the health effects of e-cigarettes has revealed using e-cigarettes triples the likelihood of taking up conventional smoking.

“Decades of public health initiatives which had put Australia at the forefront of nations that had significantly reduced the rate of smoking among adults and children are now at risk,” Dr Khorshid said. 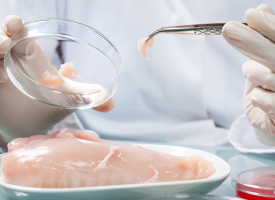 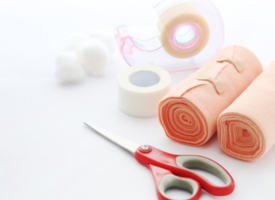 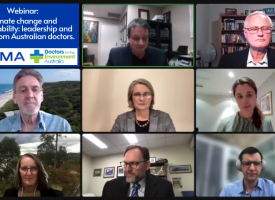