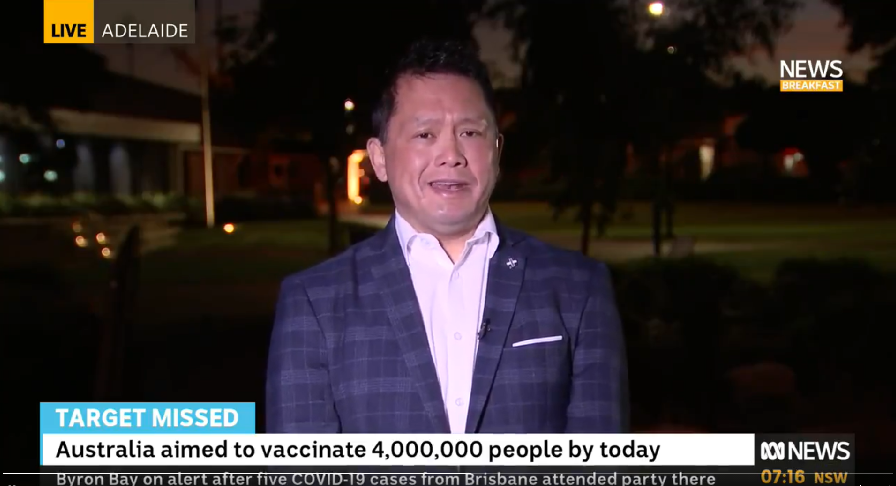 ISKHANDAR RAZAK: The Federal Government has hit out at criticism from Queensland over the slow progress of the national vaccine rollout, after suggestions it may have contributed to the current outbreak in greater Brisbane. Scott Morrison pledged to have four million Australians vaccinated by the end of March.

SCOTT MORRISON: We anticipate, optimistically, that we would hope to start the vaccination with around 80,000 vaccinations a week - that's what we are targeting - and, and then seeing that build up over the next four to six weeks. And we hoped, by the end of February- end of March, I should say, to have reached some four million population. That is a target, that is what we are working to, but as the information and other things become clearer, then I think we can provide further updates on how we are tracking against those goals.

MADELEINE MORRIS: So, the PM back in January making clear that four million was a target. Well, we're at that date now and, in fact, just over half a million people have had their first jab, with a nurse and doctor who tested positive in Brisbane amongst the front-line healthcare workers who haven't. So, what is going wrong? Dr Chris Moy, Vice President of the Australian Medical Association, joins us now from Adelaide. Thanks for joining us, Dr Moy. What is going wrong here? Why are we at this glacial pace?

CHRIS MOY: Well, look, I think there's two separate issues. With respect to Brisbane and the frontline hospital staff, they were in group 1a and they were the Pfizer shots which were distributed for frontline health staff by the state. So, the issue there is going to be whether they got them out fast enough, and where then they were prioritised to the staff that really needed it, who were going to deal with COVID stuff - so, let's separate that.

With regards to the overall pace, look, obviously people are looking at these, these overall targets, with 1b particularly. Less concerned about that, because overall the issue has been supply because until now, as you know, last week was the first day of production in Australia of the AstraZeneca vaccine. But prior to that we were hoping to get somewhere in the order of about 3.8 million of them from overseas, but unfortunately, I think we've received less than a million of them, so it was not possible to get that four million target purely because of supply.

MADELEINE MORRIS: Yeah. And we've seen, on social media, so many photos from GP clinics, extremely frustrated. They've got massive fridges ready for their supply and they're getting 50, 50 doses a week. So, is that now going to be ramped out to the GP network?

CHRIS MOY: Yeah. Look, look, the clinics are coming online at about 1000 last week, 500 this week, and about 1000 or so the next, each week over the next couple of weeks. We are ready to go.

If, if CSL can get it going we'll be happy. They're predicting somewhere in the order of about a million a week. My understanding, the problem is, they're actually quite good at making it. The problem is getting it into those bottles at the moment, and then getting it out to us. So, that's a huge logistical exercise, but from a general practice point of view, look, this is actually pretty straight forward. It's been pretty calm for most practices doing it. In fact, a very positive process out there because, really, we do this every year with the flu - it's called business for us, so we're ready to do that job for the mass community.

MADELEINE MORRIS: The thing about the GP network, though, is isn't this actually the most expensive and the slowest route of doing it? I mean, Norman Swan yesterday was talking about partnering more with the states. So, in the UK, the US we've sort of seen mass vaccination centres. We see councils very effectively, every year, delivering childhood vaccinations in a mass setting. Would you like to see that be more of the approach if we're going to hit our targets?

CHRIS MOY: I'd say a couple of things. I don't agree with Norman. We do the flu vax every year, 6 million shots, really quickly every year. And look, it's day eight, or nine, I think, of the rollout in general practice so, I think he needs to give us a chance. In terms of, you know, mass vaccination clinics, there are other options around out there at the moment, like the respiratory clinics. And, the hospitals are supposed to be doing it, but, as you know, the hospitals haven't actually got it out there that fast themselves, so they're supposed to be mass vaccination clinics.

In terms of things like, you know, big halls and, getting stadiums to do it, well, they may come into play. But look, we are day eight and, as I said before, the problem hasn't been actually the GPs doing it, it's because we're day eight and we can't get the supply. So, let's give general practice a chance at the moment.

MADELEINE MORRIS: And, just on the supply issue. We heard that there has been, you know, the amount sent out to the states, but in fact this came from the Federal Government. The states have only administered about half of the supply, on average, about half of the supply that they have actually been given. They have been, according to the Federal Government, holding on to that for the second dose, which they're being urged not to do. So, is that part of the issue as well? And if so, why, why that delay? Why holding back actually giving out the doses that they have?

CHRIS MOY: Okay. We're back to talking about 1a and front-line staff, the hospital staff and quarantine staff. So, they are being given directly to the state governments to distribute. It's up to them to actually prioritise and decide what they need for the second dose. So, I'll say to them, the prioritisation is maybe something we'll look back at Brisbane, as to whether they prioritised the right staff, and frankly, if they are the staff that should have been actually been working with people who had COVID because, if you look back to the outbreak now, that's where we're going to go back to.

Getting back to the holding back for the second dose, there is a problem with the Pfizer because the recommendation is you have it, you know, within that month or so. So, they- it's quite a short turnaround for that second dose [audio skip] do understand them holding on to at least the significant proportion of the dose for that, for that second thing. The thing about the Pfizer, it's only coming in dribs and drabs from overseas at the moment. So hopefully- you know, as long as we can get that continued supply, as long as Europe don't hold it up, we should be okay. But yeah, they had to- they have had to hold it back for assurance to get that second dose.

MADELEINE MORRIS: Okay. Look, it's a complicated rollout obviously, Chris, with lots of moving parts. Thank you very much for coming in and speaking to us from the AMA's perspective today.