ROS CHILDS:          More now on how hospital systems and healthcare workers across the country are coping with increasing numbers of in-patients and staff shortages. Here's the president of the AMA, Dr Omar Khorshid. Omar, thanks so much for your time. Can we start with Victoria's emergency Code Brown then, which is now in operation? How far will this measure go to relieve pressure on the hospital system in the state?

OMAR KHORSHID:           Well, it's another act of desperation from governments trying to cope and to paper up the cracks, I guess, from decisions made earlier, not to try and slow this Omicron virus down. It's an admission that the hospital sector is in extreme difficulty. And hopefully it will go some way to finding some extra staff, but in doing so, it, of course, puts extra pressure. It means no annual leave for a whole pile more healthcare workers who desperately need a break from such a busy couple of years. And it means also that those people wanting other types of care, elective surgery, and other so-called non-urgent care, are going to be waiting longer and longer while this crisis continues.

ROS CHILDS:          And Victoria's nurses' union, they're calling on the Federal Government to call in the military to help. Do you support that call?

OMAR KHORSHID:           I'm not sure that we have a huge medical military resource available to us in Australia. Thankfully, our military haven't been involved in ongoing operations such that we have a huge infrastructure in our military hospitals and huge numbers of military medical staff. Many of the medical staff in the military actually work in our health system day-to-day. And so they're already on the frontline. So I'm not sure that's really the solution here, probably more they're utilising the resource that we have in the private sector, which we heard yesterday from Health Minister Greg Hunt. That's probably a better source of people, because ultimately, it's the people that we need to keep our healthcare system going.

ROS CHILDS:          Greg Hunt did say that mobilising the military isn't necessary because there is still enormous capacity, he said, in the private sector. How do you see the public and private sector working together?

OMAR KHORSHID:           Well, it's mainly the staff. And we've seen different states utilise the private sectors in different ways through the pandemic. In New South Wales, they mainly tried to source nursing and other staff from private hospitals and send them into the public hospitals. But of course, the other way is to use the actual physical resources, the beds, and the staff in those private hospitals, to move COVID positive patients or even other patients needing non-COVID care out of the public system and into the private system. But of course, it's also worth remembering that every time you do that, you're stopping the care that was available to other people. And of course, there are many, many thousands of Australians who had hoped to have some elective surgery in the private sector early this year, whose hopes are now dashed.

ROS CHILDS:          Now, intensive care nurses at Westmead Hospital in Sydney, they're protesting today, asking the State Government to provide more support, saying the current situation is unsafe for both patients and for staff. Do you support their action? And also, do you have concerns that standards of care might be slipping?

OMAR KHORSHID:           There's no doubt, when you put a system and the people in it under extraordinary pressure, that standards must slip. We've heard many stories of nurses working double shifts, of looking after more patients than they would normally look after. And the reason those systems are in place, the reason those limits are normally in place, is to promote safety and quality of healthcare. So when you are forced to compromise on those things, quality does go down. And of course, that's something that sits very hard for healthcare workers to cope with. They really struggle if they don't feel they're delivering the very best care that they could to the individual patient that they're looking after at the time. And I think these protests are a sign of the extreme frustration, the extreme fatigue, and the fact that I think many healthcare workers feel let down by both state and Federal governments in terms of trying to slow down this outbreak and protect the healthcare system.

ROS CHILDS:          And people, we've been hearing, are still finding it hard to get their hands on rapid antigen test despite assurances from authorities that the supply is there. Do you have any sympathy with the PM's defence this morning, of the Government's handling of getting adequate supplies of rapid tests into the country; that, at the time of ordering them, the Omicron variant hadn't taken hold and he didn't have a crystal ball to predict how great the need for these tests was going to be?

OMAR KHORSHID:           Look, I think those statements are true. There is no doubt no one predicted the situation we would be in and that's why we're here. But what I find difficult to understand is how governments, and I'm talking state and Federal governments here, decided to let Omicron rip through our community without modelling the impact, without having the testing systems, the healthcare settings in place first because those were certainly predictable when you looked around the world and how Omicron and even Delta were devastating communities in Europe and in many other countries. The idea that we would simply sail through it without the need for any of these emergency measures that we're now putting in was simply fanciful. And I think that's where the great miss is here, that they simply let it rip without having put those preparations in place, and the key one clearly would have been better access to rapid antigen tests. 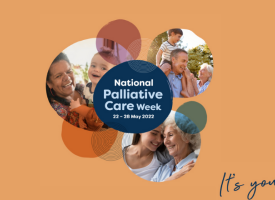 News
Demand increasing for palliative care
Back to top